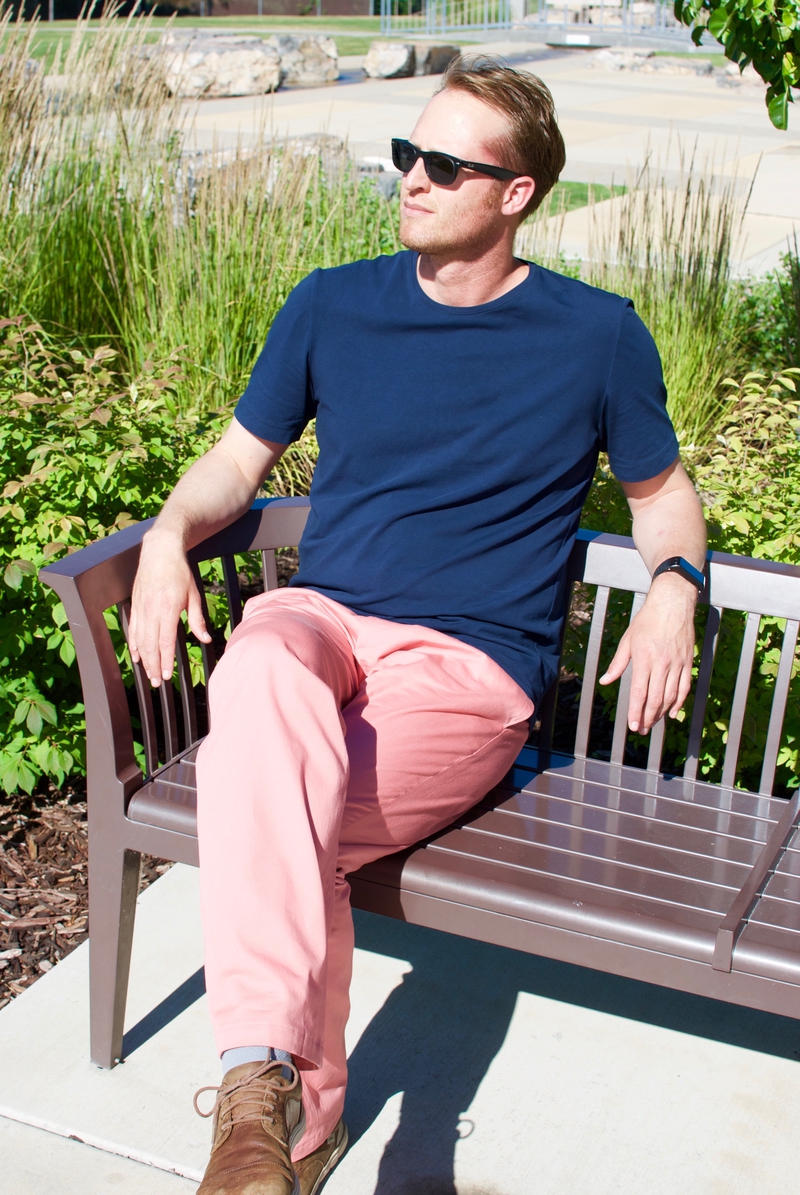 Necessity is the mother of invention. I have been dreading this day, but the day has come. Ryan no longer fits in ANY of his work clothes. Luckily, he’s a school teacher and that gives me until August to rectify the situation. Now we are faced with two choices. Go out and buy clothes, which are really expensive, or suck it up and learn to make him pants and shirts. Because of the dire situation, I’m forced to make this happen. I’m pushing myself to figure out a pant pattern and a long-sleeved shirt pattern. Let’s be honest, I’m super scared and I hope I can push myself to do this! 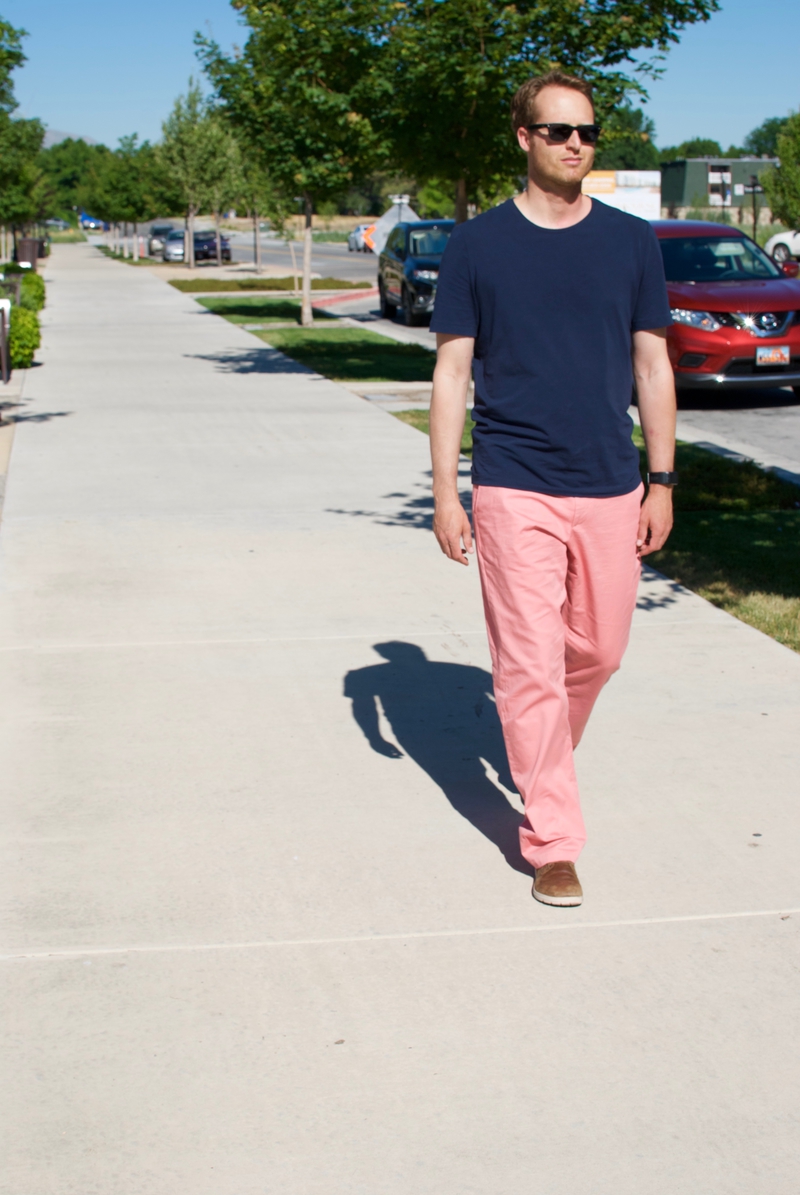 Not too long ago, I found a great basic shorts pattern (see here). The fit is nearly perfect, so I used that pattern as a kind of sloper to make adjustments on the Simplicity 1286 pant pattern. Before I even got to the Simplicity pant pattern, the first thing I did was go buy every pant pattern for men at JoAnn’s and kept the one that best matched the shorts and returned the rest. Back to my pant adjustments…the first thing I noticed was that I needed to make a full seat adjustment. I extended the crotch by almost an inch and I also deepened the the seat curve. Normally you would also need to add to the hip since deepening the seat curve takes out width from the back, but in fact I had to take in the hip a little because it was still too wide. 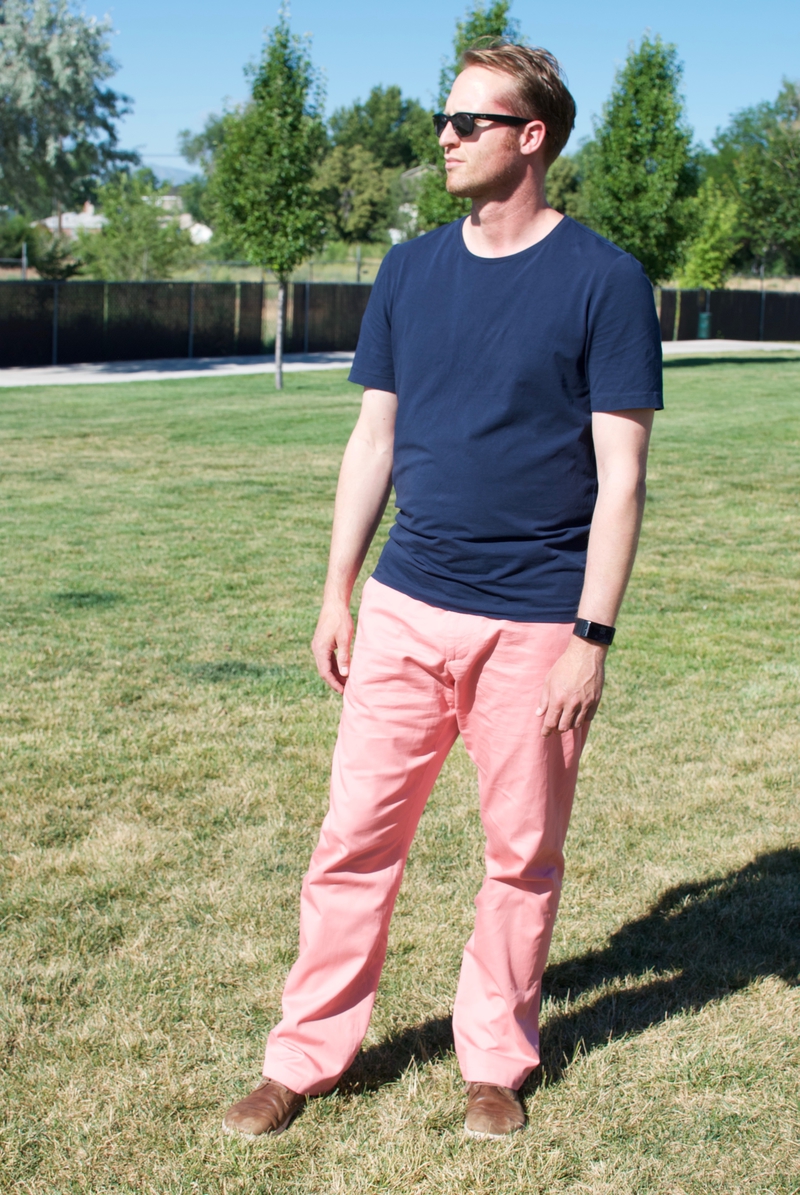 I also lengthened the front crotch, but took out that adjustment later when I was fixing the pants. The front of the pants were super saggy and so I realized I didn’t need to lengthen the front crotch. Whoops. 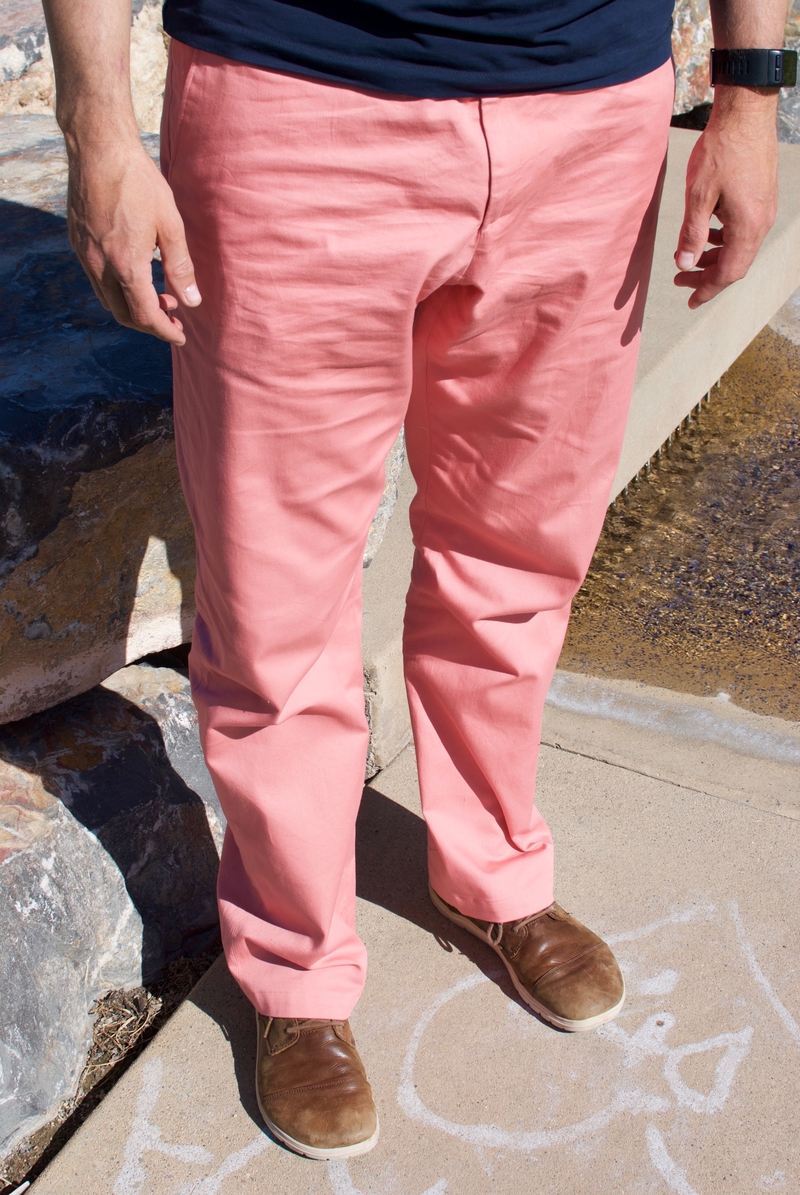 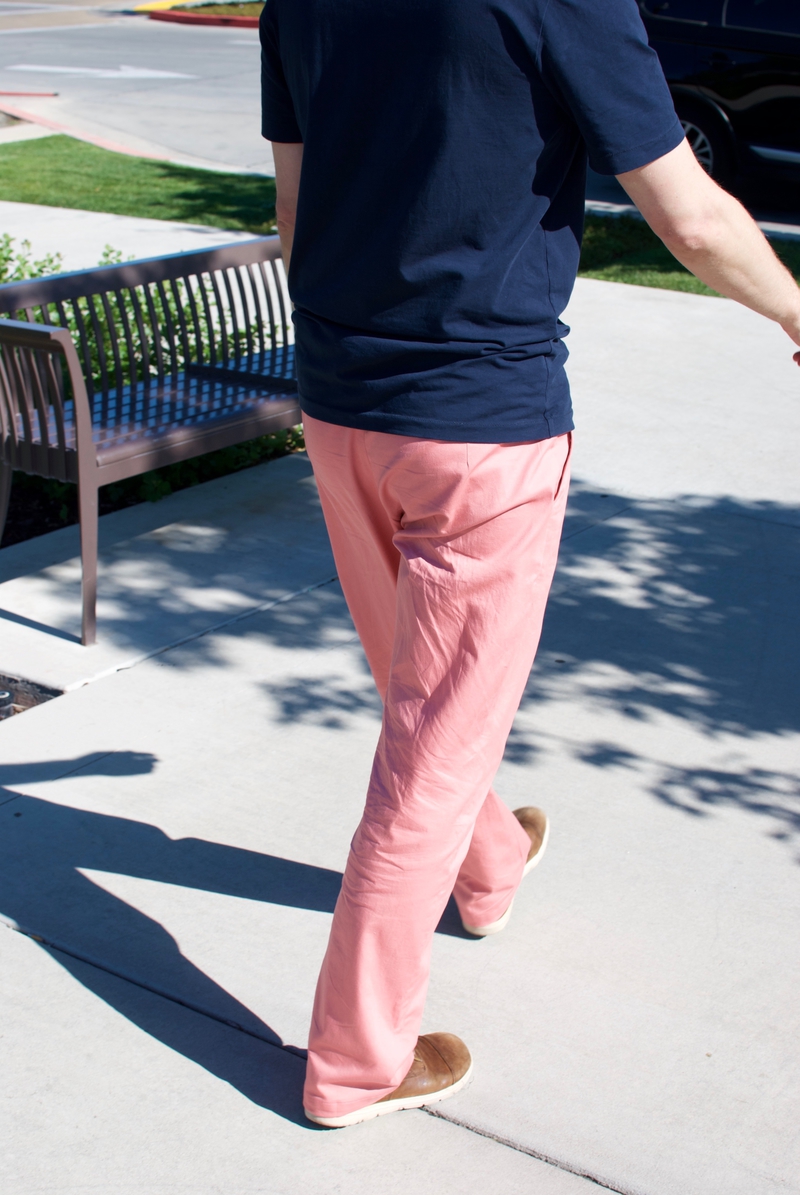 Before sewing him pants, I made the full seat adjustment, lengthened the front crotch (which later got removed), and added 5″ in length. I really, really wanted to make Ryan a wearable muslin. I used good fabric and took my time with the sew. I was shocked and elated with how well the pants fit first try. 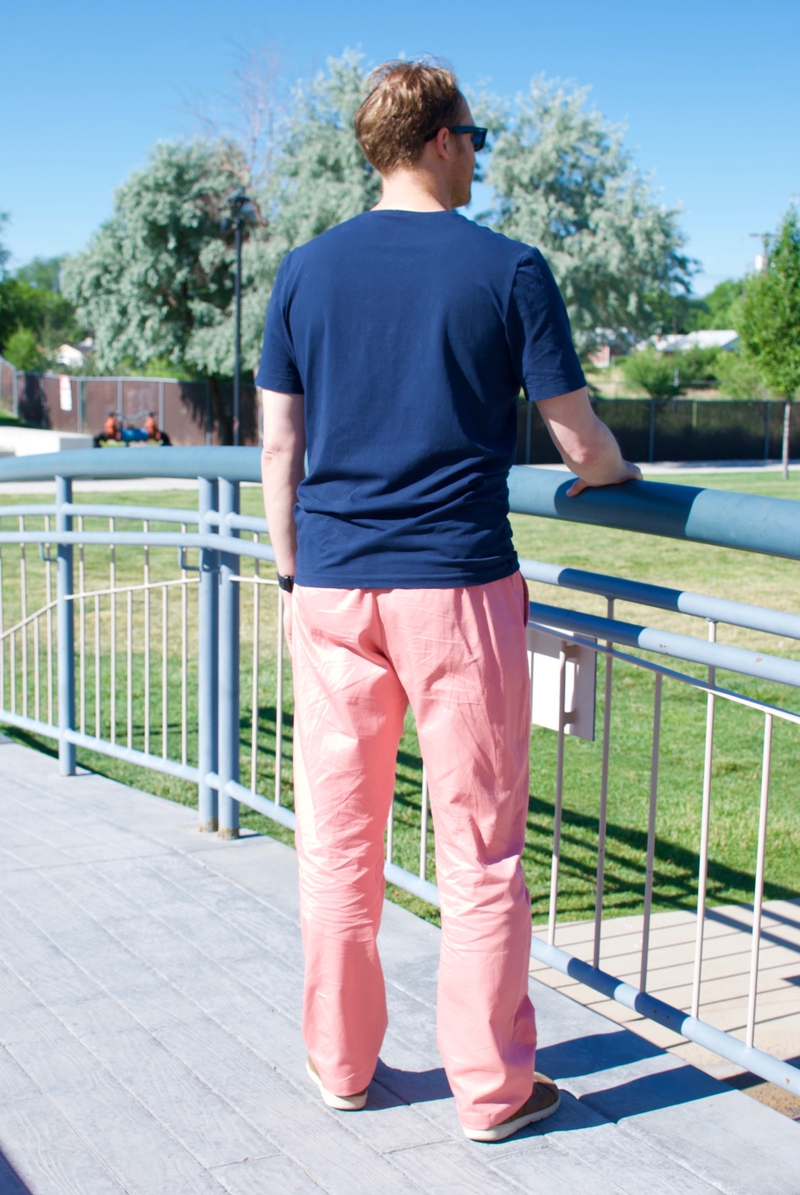 I noticed quickly I had to remove the length of the front crotch and I just made the adjustments back to the original pattern sizing. I also took off about 1/4″ inch around the back hip. And the pants are done. 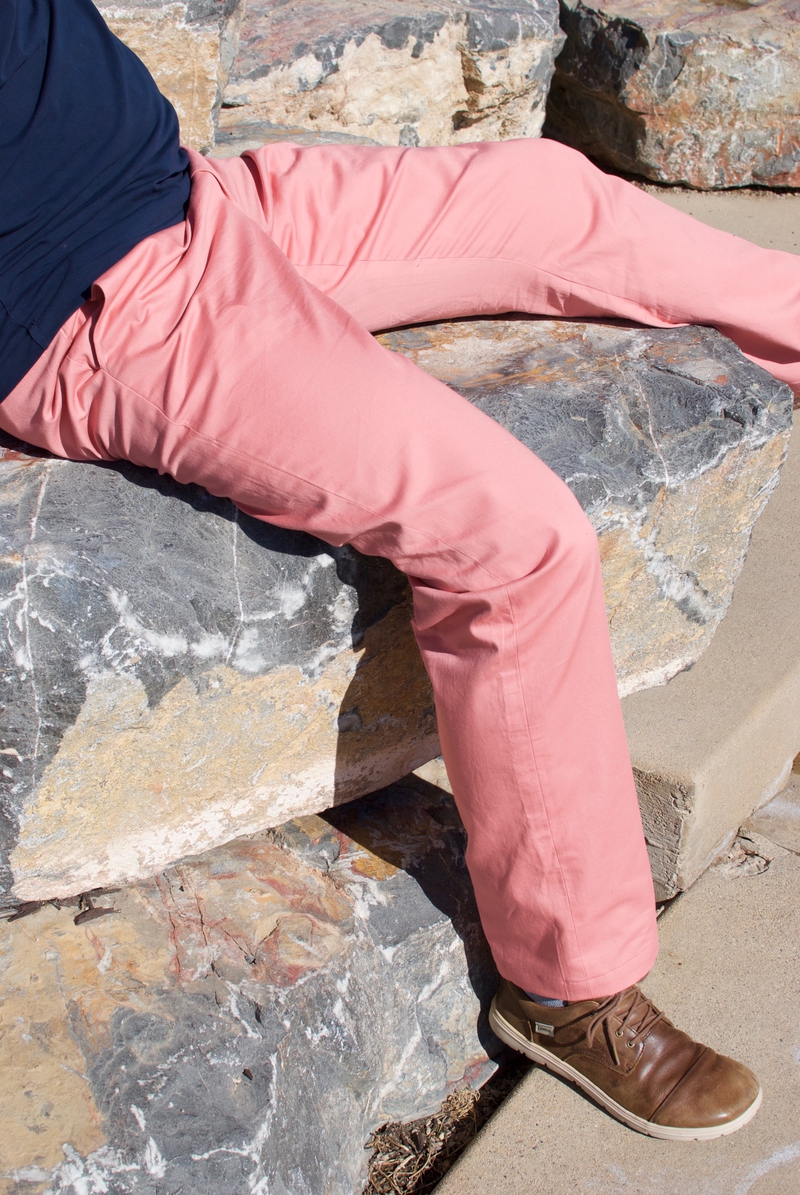 Now at this point I’m wondering if there’s any further adjustments I could make? I think I might have to fiddle with the waistband. It could probably come in 1/2″. I also don’t know if I could shave a hair off the leg width. The fabric has zero stretch, so they need to be straight cut classic chinos otherwise they’ll be too tight around the leg. And yes, I did make my husband carnation pink pants.