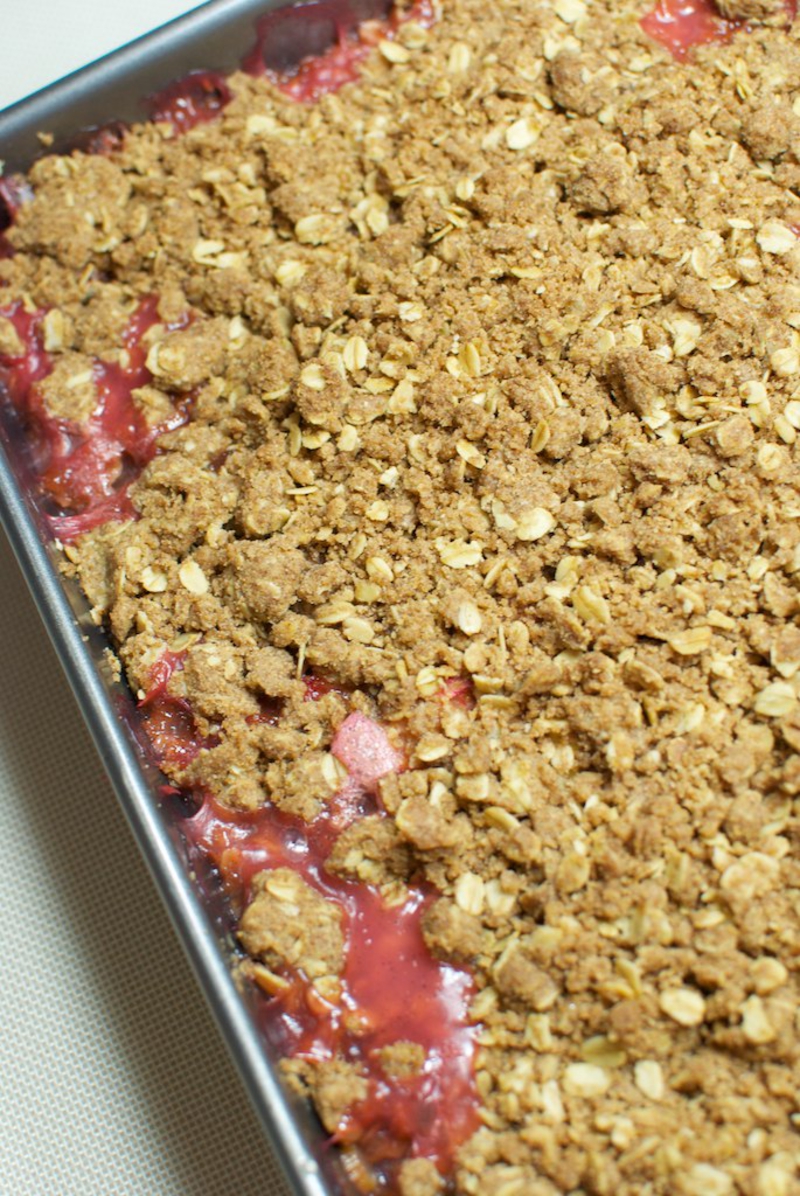 As I sit here writing this post, I’m enjoying a slice of the rhubarb crisp. This is probably some of the best rhubarb I’ve ever eaten. I found my local supplier by typing “rhubarb” into the local newspaper classified ad section. As a technology junky, I never thought about local households posting their garden excesses in the newspaper. When I found this out, I was too excited. Less than a mile away we found a family that prides themselves on growing rhubarb. They have a lovely house and a small household garden and they have rhubarb! The rhubarb that they grow comes from Maine and has been in the family for many decades. It’s an older plant that brings with it an incredible flavor. There’s a flora essence to the naturally tart rhubarb that makes it absolutely divine. Luckily rhubarb grows all summer in the mountains, so I’ll be able to get more rhubarb as it becomes available. I’m delighted. It is so delicious and tasty.

If you haven’t cooked a lot with rhubarb, it can be a rather intimidating ingredient I think. First of all, if you have access to a Cuisinart food processor, save yourself a lot of headache and use the slicer attachment to slice your rhubarb quickly and efficiently. Secondly, did you hear that if you eat the leaves of rhubarb you could be poisoned and die? My wild imagination as a kid extrapolated to thinking I would die if I ever touched the leaf part of a rhubarb, so I was always afraid to even touch the stuff. I was a weirdo. Since then, I’ve learned that the main poison in rhubarb is oxalic acid. Just now, I found out looking on Wikipedia that many plants have oxalic acid. It’s just that the rhubarb leaves are so very high in oxalic acid, but don’t let this deter you from enjoying rhubarb. You won’t die by touching the plant.

The rhubarb tart recipe I am sharing with you comes from my grandma. I didn’t often get rhubarb growing up, because it was hard to find in the grocery store. My mom never had a garden, so we had to rely on the grocery store for our produce. However, when we traveled from Indiana to Nebraska, Grandma thankfully always had some rhubarb in her freezer.

Rhubarb freezes wonderfully and can be used later during the long winter months in a pie, tart, or as jam. Freezing rhubarb is the simplest way to keep the fruit ready to use when you need it for later. In the freezer, the rhubarb will last 6 to 12 months if packaged appropriately. Wash the rhubarb and trim off the ends as you normally would. Slice the stalks a little thicker than normally, about 1/2-inch pieces. If you plan to keep the rhubarb in the freezer for more than 6 months, you may want to blanch the rhubarb in boiling water for 1 minute so it will keep its color. Remember when blanching to immediately cool the fruit in ice water to stop it from cooking longer than one minute. I won’t even recommend freezing the rhubarb in Ziploc bags, because of the fear of freezer burn. Use a vacuum food sealer and save yourself the worry of having to deal with freezer burns. To use frozen rhubarb, just set them in the fridge overnight, or on the counter for a few hours.

Off to get myself another slice of rhubarb tart! I hope you enjoy this recipe.